We’re very proud to be hosting the first community Christmas performance at Stretford Public Hall since 1977!

Stretford Children’s Theatre are staging their biggest-ever show in December at The Hall. You will see Horton the Elephant, the Cat in the Hat and all your favourite Dr. Seuss characters spring to life
onstage in Seussical JR, a fantastical musical extravaganza from Tony-winners Lynn Ahrens and Stephen Flaherty.

Performances dates and times are:

This is a fun show for all the family and suitable for children from 3 years old.

We’d love to see you here for what promises to be a wonderful festive show!

4 meals for two at Samir's restaurant

Tickets are £1 each and will be on sale at events at Stretford Public Hall, and on the Christmas fair on 7th December 2019.

Get involved! Join our Board of Directors

Have you got the passion & skills we need to help achieve our vision for Stretford Public Hall?

Each year we are on the hunt for dedicated individuals who are willing to add their own unique skills to our Board of Directors.

Friends of Stretford Public Hall’s Board of Directors is elected by and from the members. Democracy is the lifeblood of co-operatives and we want as many of our members as possible to get involved in the election process, either standing as candidates, nominating candidates or voting for candidates.

There is no person specification for the perfect director. In fact, we want a real balance of skills and personalities to help take FOSPH forward. If you are passionate about co-operatives, community ownership and have the skills and knowledge to make a positive impact, you could be just the person we need...

We currently have vacancies for three new Board members, to join the Board in October 2019. In particular, we are hoping to recruit a new Treasurer. We're also really keen to appoint individuals with skills and experience relating to human resources, and marketing and communications.

If you want further information, or would like to speak to either a current member of the Board of Directors and/or an officer of FOSPH, please contact our Secretary Petra Morris by email at [email protected]

An online application form is available here or you can complete a hard copy which is available within the Information Pack. The deadline for applications is Friday 4th October 2019.

On Sunday 1st July we attended Trafford Live - and we took our building with us!

We wanted to tell everyone about how Stretford Public Hall is a co-operative, owned and run by our members- over 800 of them! We ran a little competition where we asked children to design a brick with their name and add a sticker to our Stretford Public Hall representing all the members that make up the building.

We had some great entries and it was tough to choose a winner but we're happy to announce that Matilda Yarwood, who is 8 years old won a £10 gift card for her entry.

Big thanks to all of you who visited us at our stall, and to the volunteers who helped us run it- Hope to see you all in the building soon!

The Architectural Heritage Fund have highlighted Stretford Public Hall as 'showing the way' when it comes to the transfer of assets of community value into community ownership.

Our community ownership of the Hall was highlighted as a leading example at the launch of a new report 'Our Assets, Our Future'. The report was commissioned by Power to Change and the Ministry for Housing, Communities and Local Government. The report found that there are over 6,300 community-owned assets (eg leisure centres and village halls) in England, contributing £150m into local economies.

We're also delighted to feature as one of the Co-op Foundation's 'hero projects', in their new Save our Spaces campaign. The story of our campaign to save Stretford Public Hall features in a short video that's been produced to launch the campaign. You can view the video on the Endangered Spaces website. Look out for pictures of the Hall appearing on screens in Co-op stores across the country! 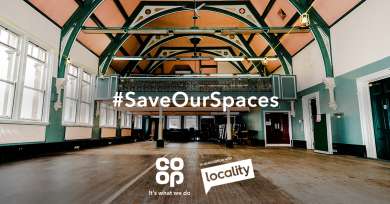 We are recruiting! Trafford Culture Champions

Would you like to come and join the team here at Stretford Public Hall? We are recruiting a part-time Project Co-ordinator, to lead our new Trafford Culture Champions project.

Trafford Culture Champions aims to actively engage older people with age-friendly cultural activities in their local area, ensuring that older people are reflected in and have influence over local cultural activities. The project aims to reduce isolation and loneliness in Trafford residents over 50, focusing particularly on Longford, Clifford and Stretford.

The project is a collaboration between Friends of Stretford Public Hall and Limelight in Old Trafford, working in partnership with Greater Manchester Combined Authority (GMCA), Great Place Scheme, Manchester
Museum and Ambition for Ageing.

We are looking for a part-time Project Coordinator (3 days/week; 0.6 FTE), to lead the project. The post is based at Stretford Public Hall. Deadline for applications: Sunday 14th July.

Visit our 'Work for us' page to find out more.

In honour of World Yoga day, join us for a day of yoga practice in our beautiful Victorian Ballroom.
Community café open between 11am-5pm serving tea, coffee, soft drinks, homemade cakes and snacks


Money raised through this fundraiser goes back into planning further activities at the hall, including our Wellbeing Programme that offers classes on a pay what you can basis.

The art of balance - finding balance in body, breath, mind and being.

Bringing ease to the body and calm to the mind.

Energising the body and mind with twists.

Gentle chair yoga including some standing poses, finishing with a seated relaxation

Moving to stillness through asana and pranayama

Wrap up the day with a 45 minute deep relaxation of Yoga Nidra (Yogic sleep). You may want to bring a blanket.

We are really excited to announce our forthcoming Herstories Festival, which will take place from Friday 10th to Sunday 12th May 2019 here at Stretford Public Hall.

The weekend-long festival of cultural activity will feature film screenings, workshops and a range of arts, all celebrating the history of women and social change in Manchester. Generously funded by Film Hub North and delivered in partnership with the North West Film Archive (NWFA), MACFEST (the Muslim Arts and Culture Festival) and the Stretford Arts Collective, SAC32.

Join us on Friday night, as we kick off proceedings with a screening of Born a Rebel, a short documentary charting the history of women in protest across the North of England since the start of women’s suffrage 100 years ago. The screening will be followed by a panel discussion and accompanied by an inspiring and varied selection of short films and archive footage, featuring Delia Derbyshire, Roxy Music, and a riot of awesome women activists.

On Saturday day, the Hall will be a hive of activity, as we celebrate the women who make Manchester great. Stretford Arts Collective will be printing, stitching and sticking a live art installation downstairs and there’ll be Arabic calligraphy drop-in sessions, henna painting and a chance to learn more about the different Muslim cultures of Manchester.

In the cinema room, we’ll be presenting a specially-curated selection of local history films, showing Stretford over the years, as well as a chance to see the documentary ‘Invisible Women’, telling the story of Manchester’s LBGTQ pioneers Angela Cooper and Luchia Fitzgerald.

On Saturday night, we’ve a special cinema screening of Made in Dagenham, accompanied by rare archive footage of Manchester women at work – from workers leaving Rylands Mills in 1902, to a fascinating glimpse into Stretford’s Job Centre in the 1970s.

On Sunday morning, there'll be family life-drawing classes run by SAC32 and on Sunday afternoon, as football clubs around the country prepare for their last games of the season, we’ll be celebrating women’s football, with an early afternoon screening of Bend it Like Beckham and a chance to learn more about the Dick Kerr Ladies team of the 1920s.

As if all this wasn’t enough, John Rylands Library have kindly lent us some of their recent ‘The Women who shaped Manchester’ exhibition, which will be on display all weekend, throughout the Hall.

Save the dates! Ticket info and more details coming soon!

Save Our Species Poetry Competition Deadline

Write a poem about saving our species and e-mail it to [email protected] or post to Stretford Public Hall, Chester Road M32 0LG by the 22nd February with your name, age and contact details. We have a first and second place prize lined up for each age category! We'll be announcing the winners at our World Wildlife Day Festival on the 3rd of March.

With Wildlife Day focusing awareness on marine Life this year, we invite you to explore how we can make a big difference to our Marine Life.

An animal-loving volunteer and a small-town news reporter are joined by a native Alaskan boy to rally an entire community - and eventually rival world superpowers - to save a family of majestic gray whales trapped by rapidly forming ice in the Arctic Circle.

Under 18s need to be supervised.
Snacks and drinks will be on sale- bringing your own will not be permitted.

Join us in exploring how we can help save our species on a local level!
Information stalls and family activities from Stretford in Bloom, Pet's Corner, Longford Park Allotment, Pledge, Pebble Art, The Stretford Un-Camera Club, Trafford Conservation, Friends of Victoria Park, Stretford WI, City of Trees and more

Talks on the Natural History of the Mersey Valley Meadows, Growing Wildflowers and more.

At 3.30 pm we'll be announcing the winners of our poetry competition 'Save our Species'

We'll be running a community cafe with tea, coffee and sweet treats.

The Manchester Tart Company will also be cooking up a variety of vegan food offerings.

Board of Directors vacancy: Treasurer

The Friends of Stretford Public Hall (FOSPH) are looking to appoint a new Treasurer, to join the Hall’s Board of Directors.

Our vision is for Stretford Public Hall to be a unique and thriving multi-purpose venue at the heart of Stretford, owned and run by the local community. This is a fantastic opportunity to get involved with the management of this unique community asset, as we approach the exciting next stage of the Hall’s renovation and development.

The Treasurer will work closely with the Board’s Finance Sub-committee, providing financial oversight, advising on financial reporting, banking and book-keeping, and helping the Board to consider the financial implications of strategic developments.

The role of Treasurer is voluntary though reasonable out-of-pocket expenses can be reimbursed.

We are keen to hear from anyone interested in the role of Treasurer but we are particularly looking for someone with financial or accounting qualifications, experience and understanding of financial regulations and compliance relating to the charity sector, and experience of financial analysis and budgeting.

If you’re interested in the position, please read this further information including more details on the role and the expectations of Board members.

To apply: Please send a CV and cover letter to [email protected], explaining how you meet our requirements and why you would like to be considered for the role of Treasurer.